Ryan Deichert has been studying Gracie Jiu Jitsu (BJJ) since 1993. He began his training in Philadelphia at the First Gracie Jiu-Jitsu association in America. This affiliate school was the east coast’s source for proper Gracie Brazilian Jiu-Jitsu instruction.

A few years after beginning his career in Brazilian Jiu-Jitsu (BJJ), Ryan won the first Gracie Jiu-Jitsu tournament in the east coast.

To further his studies, Ryan moved to Los Angeles to train with the UFC legend, Royce Gracie at the Gracie Academy in Torrance, CA. Ryan was determined to become one of the first Americans to become a black belt in this revolutionary martial art.

During his stay at the Gracie Academy, Ryan helped Royce train for the Ultimate Fighting Championship (UFC) and won several tournaments and in-house competitions.

After training for a few years at the Gracie Academy, Ryan was accepted into the rigorous Gracie teacher training program with Grand Master Helio Gracie, Rorion Gracie, and Royce Gracie. Ryan spent 6 years studying to become a teacher in Gracie Jiu-Jitsu.

To augment his training, Ryan also trained with other well-known Brazilian Jiu-Jitsu and MMA champions in the LA region.

In 2003, Ryan moved to Tampa for a job promotion in the finance industry. He opened Tampa Jiu-Jitsu in 2007 to share the teaching method that was founded by Grand Master Helio Gracie and to extend the Team Balance International fight team to Florida.

In October 2008, after a rigorous testing, Ryan received his black belt under Relson Gracie Black Belt Phil Migliarese. Phil Migliarese is known as an “old school” instructor. He believes that before you get your black belt in BJJ, each student must be a black belt in the following areas: Self-defense techniques, Brazilian Jiu-Jitsu sport fighting, Character, and Teaching.

Currently, Ryan lives in Tampa, Florida and is the Head Instructor of Tampa Jiu-Jitsu.

*See Relson Gracie in the black t-shirt. Ryan is in the back row, center. 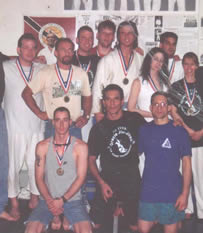 Born in Brazil in 1913, Helio Gracie was the youngest of eight children. He was frail and weak. During second grade, Helio told his mother he was too sick to go to school. He never went back after that. However, he would become the first sports hero in Brazilian history and a legendary martial artist.

Helio’s father, Gastão Gracie,helped establish a Japanese immigrant Esai Maeda, a jiu-jitsu master from Japan. To show his appreciation, Maeda taught Gastao’s son Carlos traditional Japanese jiu-jitsu. After teaching his brothers, Carlos along with his brothers started teaching others in a house in Botafogo, aborough of Rio de Janeiro.. Helio, on doctor’s orders, could only watch. However, after watching for two years, he memorized the techniques.

One day when Carlos was late to teach a private class, Helio, 16, offered to teach the student. The student was so taken with Helio that he asked Carlos to let Helio be his teacher. Carlos agreed. Because Helio was small, he had to adapt the jiu-jitsu moves to a smaller stature, using leverage and timing to overcome strength and speed. His modification of almost all the techniques led to developing Gracie/Brazilian Jiu-Jitsu.

He challenged many reputable martial artists to demonstrate his techniques during 18 professional fights between 1932 and 1967. In order to get the attention of world champion Masahiko Kimura, he challenged the number 2 jiu-jitsu fighter in the world, Kato, whom Helio choked unconscious in six minutes. Masahiko Kimura, outweighing Helio by 80 pounds, agreed to fight Helio and said if the fight lasted longer than three minutes Helio could consider himself a winner. The match lasted ­­­­13 minutes. Helio at age 43 earned the record for longest no-holds-barred fight in history: 3 hours and 40 minutes with Waldemar Saatan.

Helio taught his sons Rickson Gracie, Royler Gracie, Royce Gracie, Relson Gracie, and Rorion Gracie. Helio was Black Belt magazine’s 1997 Man of the Year. He died January 29, 2009, at age 95. The Gracie Academy website reads: “A modern-day legend, Helio Gracie gained international acclaim for his dedication to the dissemination of the art and philosophy of Gracie Jiu-jitsu. A dedicated family man who exemplified a healthy life-style,he was the epitome of courage, discipline, determination, and an inspiration toall those who knew him.” 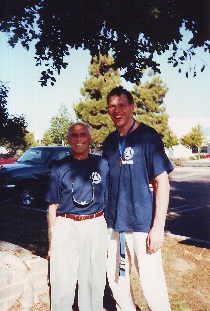 Royce Gracie is the son of the legendary Hélio Gracie who is the father figure of Brazilian Jiu Jitsu (BJJ) along with his brother Carlos Gracie. He was born in Rio de Janeiro, Brazil . Royce learned Brazilian Jiu-Jitsu from his father and his older brothers Rorion Gracie, Relson Gracie, and Rickson Gracie .

At the age of 17 he was a blue belt in Gracie Jiu Jitsu and was given the opportunity to move to the United States of America by his brother, Rorion Gracie, to help teach Brazilian Jiu-Jitsu from his garage. Royce jumped at the opportunity and moved to California even though he knew little English.

Within a couple of years of moving to the United States Royce received his black belt in Brazilian Jiu-Jitsu.

At this time he was also involved in the now famous “Gracie Challenge” which was an open invitation and a challenge to all martial artists to see if they could defeat a Gracie in a no-rules fight, if anyone could then they would walk away with $100,000…………………….nobody ever defeated a Gracie although many tried.

November 12, 1993 marked a massive change in the life of Royce Gracie after his brother, Rorion Gracie, devised the Ultimate Fighting Championship which would put fighters of various martial arts together to see who came out on top. There were 16 fighters with the like of Ken Shamrock who would take up the challenge. Royce Gracie, at less than 180lbs, was chosen to represent Gracie Jiu Jitsu and showcase it to the world as a system that could defeat much larger opponents.

In his first professional fight Royce Gracie won Art Jimmerson, once a top ten cruiserweight boxer. In his semi-final bout Royce Gracie gave away nearly 50lbs to Ken Shamrock who was atough competitor and had proven grappling ability. Royce won with a rear choke that forced the submission from Ken Shamrock. Royce was again outweighed in the final of the Ultimate Fighting Championship but still managed to beat the Savate World Champion, Gerard Gordeau, again with a rear choke. This was the show that finally launched Royce Gracie and the Gracie Jiu Jitsu system to the hot topic of every martial artist and fight fan around the world. Royce Gracie went on to the most distinguished mixed martial arts fighting carrer to date with wins in both the UFC and PRIDE fighting championships and Royce Gracie is the only person have ever fought and won 4 fights in 1 night.

Royce Gracie has taught Gracie Jiu Jitsu to many celebrities such as Guy Ritchie and Nicholas Cage as well as martial arts legend Chuck Norris as well as training law enforcement officers and the armed forces. He also host many seminars around the world still showcasing Gracie Jiu-Jitsu and its proven system of fighting. 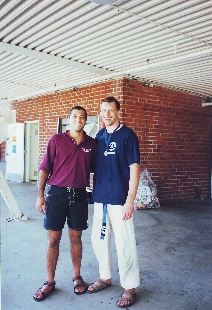 Rorion, the oldest son of Helio Gracie, put on a gi before he could walk. At 2 years old, he was already doing public demonstrations with his father. At an early age, he grasped the concepts of Gracie Jiu-Jitsu and learned to teach under the tutelage of his father. Rorion is responsible for the tremendous explosion of Brazilian Jiu-Jitsu around the world.

In December 1969, Rorion traveled to the United States for a three month vacation. After visiting relatives in New York and Washington, DC, he moved to California and stayed at the Hollywood YMCA. He had kept his return airline tickets, along with his cash, in a safety deposit box at the YMCA. A few weeks later when the time came for his return to Brazil, he discovered that a receptionist had stolen his money and his ticket. Not wanting to alarm his parents, he told them he had decided to extend his stay in California. After six months, he decided to visit Hawaii. Rorion had a great time in Hawaii – until his money ran out. At one time, he was so broke that he actually had to panhandle and sleep on newspapers in the streets. Eventually, he found a job and, by the end of 1970, he made his way back to Brazil where he attended the Federal University of Rio de Janeiro for 5 years and graduated with a Bachelors Degree in Law. At that point, Rorion made the most important decision of his life: to move to America – for good.

In 1978, with only $2,000 in his pocket and a dream to make Gracie Jiu-Jitsu known worldwide, Rorion moved to Southern California. He worked as an extra in movies and television. At the same time, he put some mats down in his garage and invited every person he met for a free introductory jiu-jitsu lesson. The word spread quickly and in 1985 Rorion invited his 18-year-old brother, Royce, to move to America.

One day on a movie set, Rorion met director Richard Donner and, after a demonstration, he was invited to choreograph the fight scenes for Mel Gibson and Rene Russo in Lethal Weapon 1 and 3. Playboy Magazine and leading martial arts publications all over the world helped spread the word with articles profiling Rorion and his unique Brazilian system of self-defense.

In 1988, Rorion produced the documentary film Gracie Jiu-Jitsu In Action™. This highly controversial video shocked all those who viewed it and quickly gained international popularity. By 1989, Rorion and Royce had 120 students coming to the garage each week, and another 80 people on a waiting list. Having clearly outgrown the garage, they decided to open what would become the world headquarters for Gracie Jiu-Jitsu.

In 1993, four years after establishing the Gracie Jiu-Jitsu Academy in the United States, Rorion realized that the best way to popularize Gracie Jiu-Jitsu would be through television. This inspired him to create the Ultimate Fighting Championship® (UFC). Through this pay-per-view television spectacle, he hoped to show that, in a “no time limit – no rules” setting, Gracie Jiu-Jitsu was the only system of self-defense that would give someone a realistic chance of defeating a larger, more athletic adversary. He recruited seven of the world’s most reputable martial artists to participate in a single-elimination tournament along with his brother Royce. Using only the basic techniques of Gracie Jiu-Jitsu Royce became the first ever UFC champion. The world of martial arts would never be the same.

In 1994, a small group of high-ranking military officials from the most elite unit in the U.S. Armed Forces, contacted Rorion and asked him to develop an objective hand-to-hand combat course based on the most effective techniques of Gracie Jiu-Jitsu. The result was Gracie Combatives® which has been taught to every major federal law enforcement agency and military organization in the US.

Rorion, who lives in Southern California with his wife, Silvia, is assuring the family tradition will continue for generations to come. On any given day, he and a handful of his 10 children can be found at the Gracie Academy teaching, training and carrying on the family legacy. 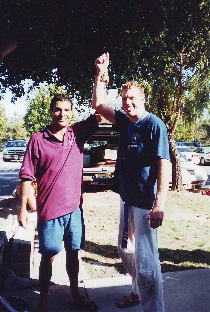